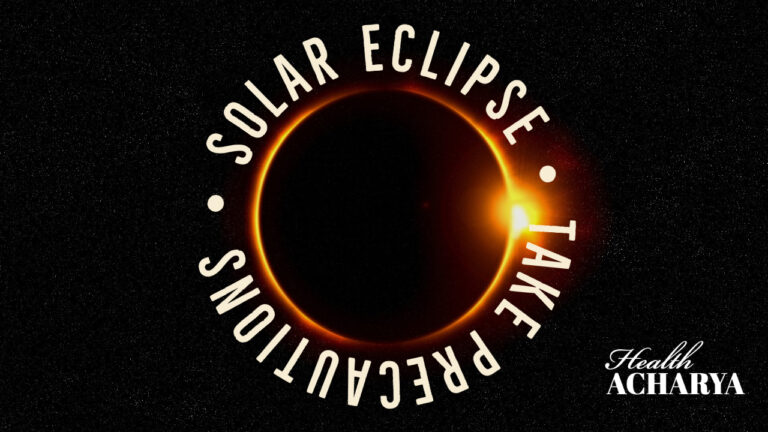 Since ancient times Indians have considered eclipse as a bad omen. Therefore there are modern and ancient suggestions about precautions during solar eclipse in India.

Time and Date of Solar Eclipse in India

what is solar eclipse time in India?

Where will it be seen

People in Rajasthan, Haryana, and Uttarakhand will be able to see it clearly. Adjoining parts too can see a partial eclipse.

Why does it occur?

Is the list of precautions during a solar eclipse in India different from other countries?

There are a few important sets of precautions that Indians should take. The list of precautions during any solar eclipse in India is the same as in other nations. But, due to cultural and religious reasons, there are some extra points.

And COVID during a solar eclipse is a new challenge and that we will be shortly explaining in this article.

Precautions that a pregnant woman should take during a solar eclipse in India.

As we all know that women in India are deficient in Iron and other minerals and vitamins. Therefore, the body immunity is an important factor for any deficient woman. Especially during pregnancy, it is important that all precautions should be taken to avoid any type of disease.

Corona is still active and prevailing in most parts of India. Therefore an overenthusiasm to witness the solar eclipse India with family and friends can be dangerous.

Otherwise, if you are a pregnant lady and have enough space from where you can witness the eclipse without any danger or infection then you should surely witness the celestial event that doesn’t happen often.

What does Indian mythology say about precautions for pregnant woman during solar eclipse?

As per Indian mythology, Sun is a strong graha and solar eclipse is not good for pregnant ladies. It also asks new mothers and newborn babies to avoid going out during the eclipse. Solar and lunar eclipse both are supposed to be harmful to pregnant mothers and newborn babies and their fragile mothers. Scientifically there is no evidence to prove that.

What does astrology or Jyotish say?

Is it different than what the mythological perception of a solar eclipse is?

Jyotish on the solar eclipse in India has almost the same list of precautions as that of mythological perception. Anyhow, there are some precise and well-laid precautions that you should follow.

If you believe in the astrological reading or Jyotish Vidhya then here are some precautions you need to take as a pregnant woman.

It is believed that a fetus can be harmed during the solar eclipse if the mother goes out. Modern science does not have any evidence to suggest the same. But, there are many mythological things that modern science has not ventured into. And, moreover, during the Coronavirus pandemic, it is better to stay home during pregnancy.

As mentioned above the sun rays during this period of time are not good for the mother and the child. Therefore, it is advised not to witness the eclipse through any outlet, hole, or window in your home.

The eclipse period is not good for a fragile and pregnant woman. So it is advised that the pregnant woman should not do any hard work or exertion, do not lift heavy items, and take rest.

As per the instructions or suggestions of astrology, it is dangerous to use any sharp item during the eclipse. So pregnant women are advised not to wear, use, or play with anything that is sharp.

5- Fasting not allowed during pregnancy

Many Hindu followers fast during the entire period of eclipse. But, women require nutrition from time to time, and therefore they are excepted from fasting. Although, it is also advised not to eat heavily to avoid any other complications.

A pregnant woman should rest but not sleep during the entire eclipse period. This is considered as bad for the child in the womb

7- Take a bath after the eclipse is over

It is a common practice to take a bath after the eclipse. A pregnant lady too can do so if she feels comfortable.

There are various mantras that people recite during solar eclipse. Pregnant women can also recite mantras and shlokas to keep herself calm during the entire eclipse period.

Disclaimer – We do not endorse the above-mentioned points to be valid or tested. They are ancient and accepted activities suggested for a pregnant woman during a solar eclipse in India. Most of them are logical and you should follow these instructions at your will and discretion.

Challenges during a solar eclipse in India during COVID

As per Indian traditions and culture, it is a custom to bathe in rivers and lakes during or after the solar eclipse. Especially the annularity path of the solar eclipse in India this time goes through Kurukshetra, Dehradun, Sirsa, Suratgarh, Joshimath, and Chamoli. These are places of religious importance and people will gather for the rituals near rivers and lakes.

Kurukshetra is one place where a large crowd of thousands gathers to take the holy dip in the Sarovar. The district administration is taking all measures to ensure that there is no large scale gathering during a solar eclipse to prevent the spread of the Chinese virus aka COVID virus.

As a precaution, all types of mass gatherings have been put on hold by the local administration as published on the Doordarshan portal.

General important precautions during a solar eclipse in India

1- Do not look at the eclipse directly. Even if there is a partial or full solar eclipse it is still dangerous for the eyes. You look at the sun directly without a filter then you bombard your retina. You may damage your retinal cells. This is called solar retinopathy.

Solar retinopathy might lead to permanent damage to the retinal cells. Therefore, you are advised to use good filters to protect your eyes.

2- Do not use homemade filters or colored glasses to watch the eclipse. These homemade filters are not strong enough to stop the dangerous sun rays to hit your retina and make you blind. You can use special filters available in the market for safety.

3- COVID precaution during a solar eclipse in India – As mentioned above, in India it is a tradition or custom to take a dip in a holy river or lake. People folk in large numbers to do so. But, as this is  COVID times it is better to stay safe at home. Also, don’t gather in a group as people usually do with their friends to witness a solar eclipse. This can be dangerous now as it will aid the spread of COVID.

1 thought on “Health Precautions During Solar Eclipse In India”